Mike Selden can trace the roots of his entrepreneurial journey back to a single article.

While reading “The Blood Harvest,” which describes how horseshoe crabs are harvested for pharmaceutical purposes, a question arose for Mike who has a long-standing interest in animal rights:

“Why do we need animals to make anything? Why don't we just make [meat] ourselves?”

A scientist by trade with an educational background in agriculture, he had long understood how “unbelievably inefficient animals are at making food for us.”

So Mike started thinking up a better way to produce “meat.” At this point, he was a researcher at New Harvest, which specializes in cellular agriculture.

“I ended up working with the executive director and we went to a bunch of conferences together,” says Mike.

That’s where Mike met investors who were itching to invest in food technologies that aren’t dependent on animal inputs.

With ideas about synthetic food production swirling in his head and clear investor interest, Mike eventually decided to take the plunge and start a venture that aims to “save the ocean, save the animals, and save our health all at once.”

Finless Foods was born.  The biotech startup uses cellular agriculture to produce seafood, with a focus on bluefin tuna.

“It's not vegan or vegetarian. It's not really the Impossible Burger,” says Mike of the product. “We are making fish meats, but we're just growing it in a very different way to most people.”

Finless has since raised $3.5 million in seed funding. When I spoke to Mike the product wasn’t yet on the market, but the company — and the industry as a whole — is growing.

“There's this whole movement of companies behind us,” he says. “We were the third worldwide to get funding. Now there’s about 40 funded worldwide, and this is all about in the past two years. So, it's exploded.”

Here are Mike’s top fundraising tips as a first-time founder in a scientific space.

A specialized accelerator helps a ton

Soon after Finless Foods’ inception, Mike linked up with IndieBio, a biotech accelerator in San Francisco. Unlike traditional tech accelerators, IndieBio offers scientists practical resources to develop entrepreneurial ideas. When Finless Foods joined in 2017, it received a quarter of a million dollars — along with a spacious lab and plenty of equipment — to get its idea off the ground.

Mike says that “[IndieBio] basically gives you science help” and “a built-in lab manager” dedicated to ordering supplies, managing machinery, and cleaning out the incubators. “Now we have someone doing that full time,” says Mike. “At the time, we could never have afforded it.”

The accelerator’s flexible model also allowed Finless to extend their stay while Mike mapped out the company’s growth plan. He used that time to seek guidance from the dozen other biotech companies at IndieBio.

Being surrounded by similar companies also provided support when the going got tough — “It was 12 sets of mistakes for the price of one, which I love,” says Mike. “I can't recommend that enough.”

By the time Finless Foods was ready to raise money, just a handful of companies around the world produced cell-based meats.

Since it was early in the space, the company had lots to do in terms of investor education. VCs “didn't quite know what to do with us,” Mike recalls.

Again, Mike turned to IndieBio where advisors recommended he go with a convertible note.

“They said, ‘Just get yourself some money and get yourself out there,’” Mike says. “‘Don't worry too much about closing an equity round.’”

To gain legitimacy, Mike tapped reporters who might have been interested in writing about his company. This is where Mike had a pretty good advantage — he happened to have a lot of journalist friends in New York.

He leveraged that network for press in beginning, starting out with “less popular, niche publications.”

By the time the company hosted a fish tasting event to help raise its seed round — it had caught the attention of a major publication. “We had an exclusive with The Guardian,” Mike says. That kind of press put Finless on the map for investors who were specifically interested in its mission.

“We more or less haven't ever cold emailed an investor. Period,” says Mike. Instead, investors typically get in touch via the contact form on the company’s website. Though press coverage offers a clear advantage for the company’s bottom line, Mike says that collaborating with reporters is mutually beneficial in instances where he can offer a source, quote, or his own expertise.

“Maybe the article doesn't mention me, but it's another thing [to help you build] your ecosystem without coming at it in a transactional way,” says Mike. “It really only works if you do it with an eye towards never getting anything out of it. Ironically, that is when you end up getting things out of it.”

A word of advice when linking up with reporters: Do not treat the press as your advertising agency. “They are not,” cautions Mike. “If you treat them that way, they are going to get angry with you.”

Be generous (good karma is a thing)

As the cellular agriculture industry has grown, so has Finless Foods’ competition. But Mike believes that the expanding market has been “an advantage rather than a disadvantage.” And as the “old guard” in a growing field, Mike insists that at the end of the day, “a rising tide lifts all boats.”

“Helping other companies without any intention of getting something out of it has helped us,” says Mike. “If there's any advice I can give to founders, it's to help everyone who’s doing anything like what you're doing.”

The benefits for Finless Foods have been twofold, according to Mike. On one hand, working collaboratively helps new companies “understand what's normal.” He says it’s not uncommon for founders to edit one another's’ decks or exchange the latest scientific updates. On the other hand, any company’s success helps to legitimize the cellular agriculture industry overall.

“It makes our industry look much more stable and viable,” says Mike. “There've been a bunch of companies who have all gone through technical due diligence,” which gives investors confidence that the industry isn’t “some crazy crackpot idea.”

It’s not a zero-sum game: in Mike’s view “the pool of money is so massive” so there’s enough VC capital to go around.

“Especially in an industry like ours that promises to completely disrupt the entirety of food, people get very, very interested in that.”

Learn how to pitch in a pinch

Mike recalls an invitation to one of our own Foundersuite events towards the end of his seed round. He didn’t realize when he agreed to attend, but he’d have the opportunity to participate in a pitching contest, too.

Some first-time founders might feel intimidated by the prospect of pitching on the fly, but Mike says its a valuable exercise in selling your idea — and looking presentable while you do it.

“If you are serious about what you're doing, you need to be able to pitch on command with whatever you’ve got,” says Mike. “And you need to be dressed in a way that you're not going to look super schlubby if you're put in front of an audience.”

Mike’s pitch was a hit. Billy Draper of Draper Associates (one of the judges at the event) actually paused the event to sing Mike’s praises. “He was like, ‘Did everybody see that? That's what all of your pitches should have looked like,’” says Mike.

Mike and Billy exchanged information, and Draper Associates went on to anchor Finless Foods’ seed round. The twist, Mike says, is that Finless was near its goal by the time Draper Associate got onboard. Regardless, the VC insisted on adding $1 million to the pot — which ended up being half a million over what the company had set out to raise — on the condition that Finless use the extra cash as runway.

Though Mike was initially resistant, he’s glad that Draper provided a buffer in case things didn’t go according to plan.

“You're not going to hit 100 percent of what you thought you were going to do, and that's fine.” 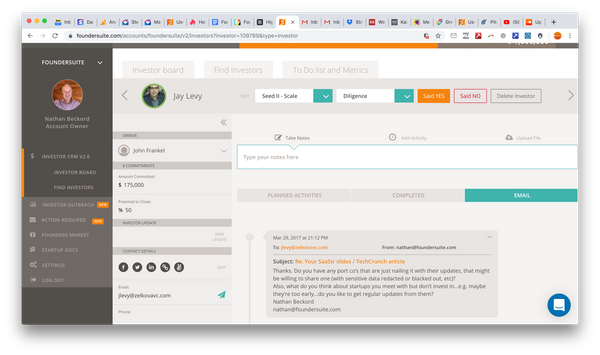 A powerful feature within Foundersuite.com: when you turn this toggle on you will be able to see ALL email threads happening with EVERY investor. 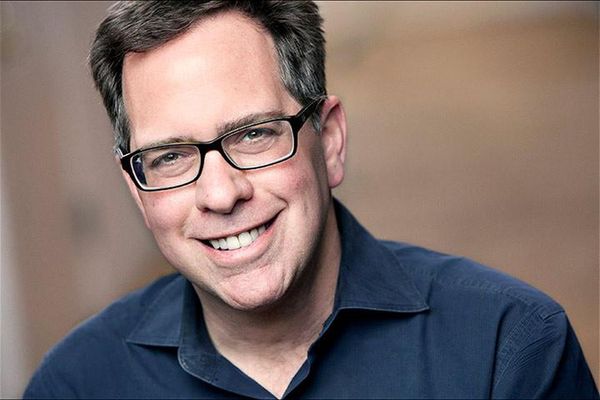 Lewis Gersh was previously a venture capitalist (VC) at Metamorphic Ventures. Now as Founder and CEO of Pebblepost, he shares his best tips for raising capital.